This is the list of TV shows that I want to watch because they sound interesting or were recommended by someone.

The Difference Between IE7 and a Virus

What do you call a program that gets loaded in surreptitiously and without your approval, has the potential to lock down your computer so you can’t get access to it, takes up significant system resources and promptly crashes upon running. Normally, I’d call it a virus, except for the last part … viruses are usually stable (and well written) once they start. On the other hand, it’s a perfect description of Internet Explorer 7.0.

I am a programmer dealing with client-side development, which means that, like it or not, I spend a great deal of time in Windows, because that’s where my users are. Given the nature of Windows, I am also forced to keep Microsoft’s Auto-Update feature active, because without it I can’t receive the dozens of weekly patches necessary to keep the system stable in the face of bad programming decisions made by Microsoft over the years. However, I was more than a little bit peeved to discover that Microsoft seemed to consider Internet Explorer 7 a “necessary patch”, rather than giving me the decision to choose to install it.

On November 1, the world over, people will boot up their Windows system and discover that mysteriously IE6 has gone the way of the dodo and IE7 is now the designated heir apparent. Of course, this assumes that in the process of booting up their system they don’t run afoul of the Validation feature, which presumably goes in and checks with the mother ship that the Windows that people are running is in fact legitimate. I don’t know the fate of those who don’t, though I can see significant swathes of business throughout the world suddenly in the dark because the copy of Windows they THOUGHT they were legitimately buying proved to be bootlegged.

Of course, if that wasn’t bad enough, I then get to sit through the install process itself, which features the increasingly common we’re-doing-something-in-the-background “cylon” bar that only tells me that Internet Explorer Core Components are being installed. At no point can you say “No, don’t install this, I’m still developing my app for backwards compatibility with Internet Explorer 6!”. At no point can you say “Hey, I really don’t LIKE Internet Explorer taking up resources on my system and I spent the requisite six hours deep in the bowels of the registry trying to extricate the LAST version of IE, so don’t install this!” At no point can you say “Wait, we haven’t properly tested this in our enterprise setup to insure that the applications we have spent YEARS developing will actually work in your stupid browser!”

Nope, you WILL install Internet Explorer 7, we won’t tell you what’s going on in the background even as we do, and we won’t even bother to show you a simple progress bar that indicates how far to perdition you’ve actually gone. We are Microsoft and you aren’t. So there.

Perhaps I wouldn’t have reached the point of ranting about this issue, save for the simple fact that after this whole process had completed, and I, begrudgingly, double clicked on the Internet Explorer “e” icon, the browser opened up, showed the default installation page, then promptly crashed.

I am writing this in Firefox 1.5. I’ll be upgrading to Firefox 2.0 in a week or so when the XForms extension is completed for it and I can finish my development there. FF1.5 does occasionally crash, usually at 3am after I’ve been extensively programming and have left all kinds of interesting things hang in the environment. As a developer, you expect crashes – if you don’t get them you’re not pushing the envelope enough, but you generally expect that such crashes are due directly to something you did. I like Firefox. I like Opera 9, which to me is a fine-jeweled watch that’s a wonder to work with. I’m even beginning to like Konqueror when I can escape outside of Windows land and play in my Linus sandbox.

I don’t know about IE7 – I’m afraid to start it up again for fear that it will corrupt my system.

Kurt Cagle is an author, software developer and technology analyst, and is the Chief Consultant for Metaphorical Web, in Victoria, British Columbia.

Ubuntu is easily installed via the Internet by downloading the http://archive.ubuntu.com/ubuntu/dists/feisty/main/installer-i386/current/images/netboot/netboot.iso.

VNC is not necessary as the default installation provides a VNC server on the main desktop window.

GConf editor: Being a Mac OS X fan, I like my Window buttons to “look like” the Mac OS config. This is an easy change with Metacity. Start the Configuration Editor from the System Tools Menu, from the command-line run gconf-editor. Locate the following setting in the navigation tree: apps -> metacity -> general -> button_layout To make Metacity place the window buttons in the same location as on MacOS set the value to: “close,minimize,maximize:menu”

Taken from Wine for Ubuntu, Debian, and Debian-based distributions

Seth Godin: “The data shows, for example, that texting while driving is more dangerous than driving drunk. It doesn’t feel that way, of course, but will you respect the data and stop, cold turkey?”

These are the software recommendations I recommend and the order I suggest.

This entry was posted in Uncategorized and tagged installation, windows. 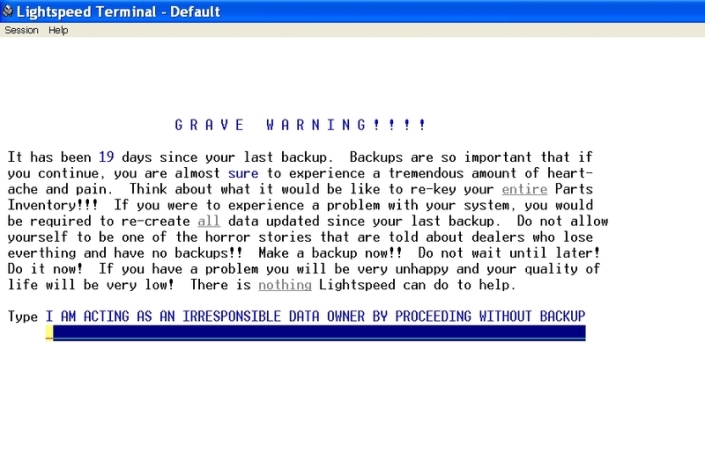 This one is less “scary” for users, as the interface is a bit more simple and intuitive